Skip to content
Balerares Islands  Formentera. We discover it through the activities
FacebookTwitterPinterestLinkedInTumblrRedditVKWhatsAppEmail

Formentera has great attractions, and lovers of rural tourism will discover many of them through its nature reserves, its possibilities for active tourism, typical buildings and much more. The island is an ideal destination to enjoy with the family.

Traveling to Formentera with our children is a great idea if we are looking to spend some memorable days. We will discover treasures such as a typical island construction nestled in the Ses Salines Nature Reserve, a rural house in the countryside or accommodation in any of its six villages. 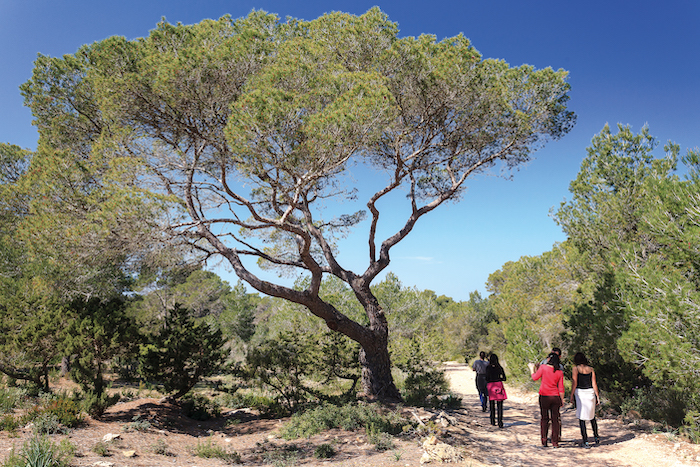 An almost pocket-sized island, small in dimensions but large, enormous, in experiences. This is Formentera, the fourth island in size and population of the Balearic archipelago after Mallorca, Menorca and Ibiza. The smallest of the Pitusas, the name with which the Greeks baptized them and which means ‘islands covered with pine trees’, is the perfect setting to enjoy a holiday or a family getaway.

La Savina, to the northwest, is the maritime gateway, where we can rent bicycles and motorcycles or contract nautical activities. Es Pujols, on the north coast, concentrates the largest hotel and nightlife offer. Es Caló, on the east coast, retains its essence of a fishing village. El Pilar de la Mola, in the extreme east and highest area of ​​the island (although it is only 192 meters high), exudes pure bohemia, and its craft market (on Wednesday and Sunday afternoons, from May to October) is one of the the essential appointments, a kind of flea market where you can find a bit of everything, and with the incentive of being set with live music.

Inside, Sant Ferran is a cute crossroads that in the seventies gave shelter to bohemians and hippies. And, finally, Sant Francesc is the rural heart of Formentera and its capital, with a small old quarter in which the church square stands out, a curious religious temple with the appearance of a fortress.

An environment that captivates

Formentera has a peculiarity that makes it very affordable for practicing outdoor activities: it is practically flat, which makes things much easier if we travel with children. It barely has two elevations, both surrounded by cliffs: the Cap de Babaria, to the southwest, and the Mola plateau, to the east.

Given this circumstance, it will be very pleasant for us to tour the island on foot, by bicycle or practicing Nordic walking, with poles. The best thing is to face any of its 32 green routes, which add up to more than a hundred kilometers of intertwined paths in which to admire that peculiar landscape of junipers twisted by the wind, sand dunes or bushes that shelter endemic fauna.

Seven destinations to try the best bread in Spain

Fitness in Vera: Sports and activities at the east coast of Almeria.

Our walks will be enriched by the fabulous environment that we will go through. The wild landscape that traps and captivates those who allow themselves to be tempted by Formentera contains great surprises that make it even more interesting, if possible, to navigate through the 83.2 km2 of this Balearic island; and more specifically for the 69 km of its coastline. 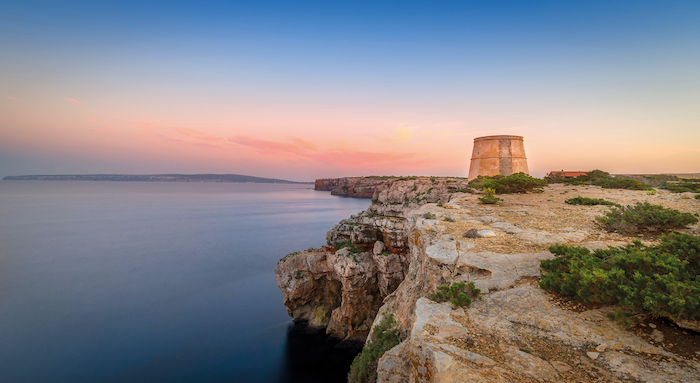 In a landscape permeated by its pine and juniper forests and also by dune areas, defense towers from the time of piracy come our way, which are sure to arouse great curiosity among our children. Although in the mid-nineteenth century they stopped fulfilling the mission for which they were created – to monitor and protect the island – their presence does not go unnoticed by those who travel along the coast, by land and by sea.

Sa Gavina tower. Located to the northwest of the island, between Can Marroig –where the Ses Salines Natural Park Interpretation Center is located– and Cala Saona, it was in charge of protecting the western area and, in particular, the accesses to the port of La Savina , gateway to the island. Built on two levels, it was restored in 2008. It owes its name to the fact that, at all hours of the day, you can see seagulls fluttering about.

Torre des Garroveret. Located in the southwest area, 2 km from the lighthouse and Cap de Barbaria. A 9-meter-high construction, 65 meters above sea level, which had two floors and a defensive cannon from the church of Sant Francesc. In 1824 it was dismantled, becoming only a defense tower.

Torre des Pi des Català. In the south, in the middle of Migjorn beach, the longest in Formentera with its 5 km divided into coves by rocky areas. Its height is 23 meters and it is the only one of the five that – after being restored in 2016 – allows you to visit its interior. It is divided into three levels and access to it is through the second floor, since the first housed a powder keg. To its upper platform, with beautiful views, is ascended by a spiral staircase. Admission is free but an appointment must be requested by email to: patrimoni@conselldeformentera.cat. On Saturdays it has visiting hours from 10:00 a.m. to 1:00 p.m.

Tower of Punta Prima. To the north, next to the town of Es Pujols. Its strategic location made it possible to monitor the passage of ships between the Mola plateau –the highest area of ​​Formentera, at 192 meters above sea level– and Ibiza. From it there are spectacular panoramic views of the largest of the Pitiusas and the cliffs of La Mola.

Sa Guardiola tower. The only one that was not built on Formentera but on the islet of s’Espalmador, 27 meters above sea level. It consists of two floors, the main one of which was intended for the lodging of the guards. This tower was restored in 1993. 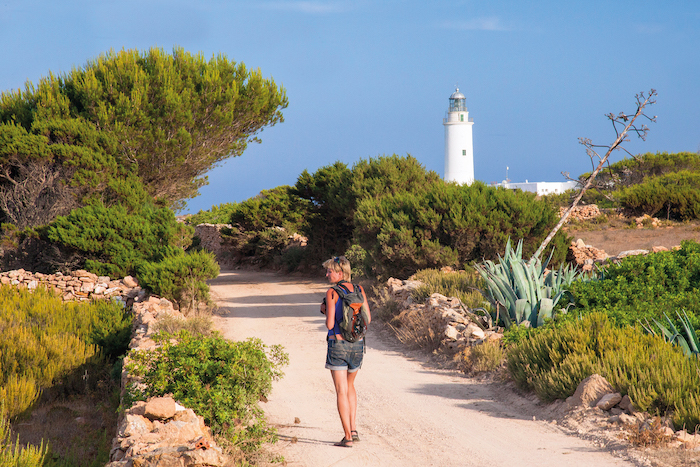 On our tour of the island, we will discover that not only Castilian La Mancha can boast of windmills. Formentera also proudly displays six of them. The flour windmills, with a cylindrical tower and six blades, are linked to the agricultural tradition of wheat, and up to seven of them once worked: Molí Vell and Molí d’en Botigues, in La Mola; Molí d’en Teuet and Molí de ses Roques, near Sant Ferran; Molí d’en Mateu and Molí d’en Jeroni, next to Sant Francesc; and the missing Molí d’en Simon, in Cabo de Barbaria.

Added to their architectural value is the importance they had in the living history of Formentera for obtaining flour, an essential product in bread making. And for this it was essential to grind the grains of wheat. First, in an almost minimalist way, with the so-called ‘blood mills’, pulled by animals that revolved around a tooth.

But it was in the 18th century when others of larger dimensions and a complex interior system based on the force of the wind that moved its external blades began to be built. Cylindrical in shape and with a conical roof, these windmills were divided into three floors: the upper one, with the gears; the central one, where the flour was obtained; and ground floor, which was the warehouse. Between that century and the next, seven were built, one of which has already disappeared: the Molí d’en Simon, in Es Cap de Barbaria. But there are still six left.

In the vicinity of Sant Francesc, the island capital, there are two, the so-called ‘mills of Miranda’: the Molí d’en Mateu, near the church; and the Molí d’en Jeroni. Both built in the 19th century, they stopped working in the 50s of the 20th century. Near Sant Ferran two others can be admired: the Molí d’en Teuet (1773), the first of which there is documentary evidence, which stopped grinding in 1964; and the Molí de ses Roques (1797), without operation since 1936, which today is integrated into a house.

The other two remaining are in the Mola area. One is the Molí d’en Botigues, from the end of the 19th century, which ground until the middle of the 20th century. And the other is the most beautiful and best preserved on the island: the Molí Vell de la Mola. Located on the outskirts of El Pilar de la Mola, heading towards the lighthouse, it is the only one of the six that can be visited, free of charge, inside (every day, except Sunday, from 10:00 to 13:00). Built in 1778, it has been declared a Site of Cultural Interest after being completely restored, including its traditional mechanism, so its fabulous gear can be admired.

A seventh mill, of great importance

These six windmills – now inactive, purely of heritage interest – will soon be joined by a seventh, recently acquired by the Cooperativa del Campo, which has been reactivating the island’s agricultural sector for six years, and which will be located in the Polígono Industrial located between La Savina and Sant Francesc. With it, it is intended that wheat, which is still an essential crop on the island, will serve to convert the local grain into ‘xeixa flour’, the result of an artisanal and millenary cultivation of wheat, and achieve DOC certification. In this way, it could become part of the local products that value Formentera’s gastronomy; an island that is committed to respecting the environment and sustainability, culinaryly framed in slow food. The ‘island of wheat’ will thus be revitalized again.

Mojacar. The ideal destination with your family
Related posts
Andalusia