Skip to content
Europe  Vilnius: A trip to the Centre of Europe
FacebookTwitterPinterestLinkedInTumblrRedditVKWhatsAppEmail

The capital of Lithuania is the geographical centre of Europe, European Capital of Culture 2009, Europe’s greenest capital and the Jerusalem of the north, but none of these terms express the delight of strolling through its baroque streets. Come discover this small Baltic gem with us. 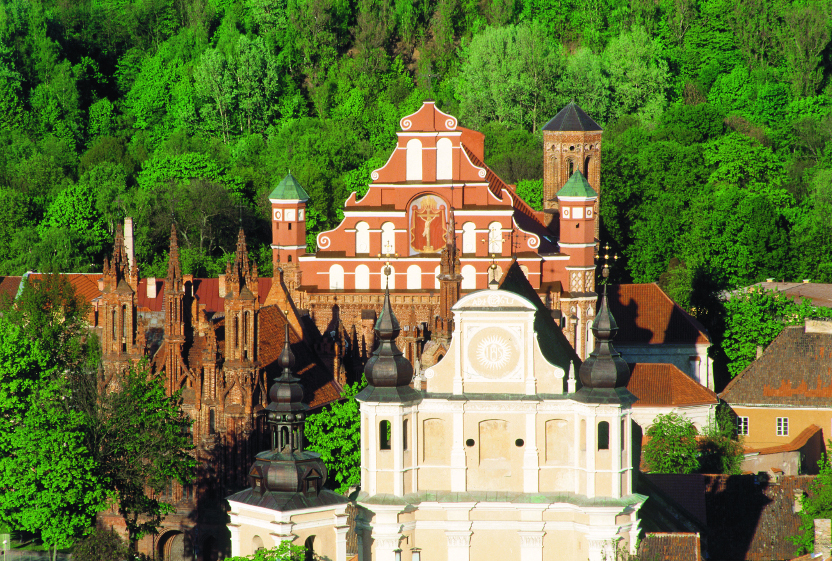 Vilnius should be explored leisurely, in order to savour every corner, because the city has many faces that are revealed to visitors with every step you take. This capital of what used to be the largest state on the continent, with borders that stretched from the Baltic sea to the Black sea, can not be discovered in just a short visit.

A thousand years and more

The first written record of Lithuania dates back more than a thousand years. A thousand years is a long time for history, and more so when the walls and streets of the city have seen the presence of Christians, Orthodox, Jews, Tartars and have also undergone sieges, invasions and dominion by Crusaders, Polish, French, Germans and Russians. All of this history remains and can be seen in the unusual architecture of the old city, the best preserved baroque ensemble of the whole centre and eastern part of the continent. If you want to see it all, go to the Gedimias hill, where the High Castle was built to defend the city from the Crusaders. The tower, symbol of the city, now holds a museum. Or if you want a better panoramic view of the city you could go for a ride in a balloon. Vilnius is the only capital in the world where balloons take off from the centre of the city itself. For £115 you will not only have a wonderful hour-long flight, you will also receive a certificate, a baptism ceremony, champagne, and more. www.oreivystescentras.lt

Churches and more churches, that is what you can expect on a visit to the capital of Lithuania, which is a bit ironic considering that Lithuania was the last kingdom in Europe to accept Catholicism. As if the Lithuanians had wanted to settle their debt with God, they filled the city with the best and most beautiful examples of the religious architecture catalogue, from the Middle Ages to today. A walk through Vilnius should start at the Cathedral, the country’s main catholic temple and the resting place of key figures of Lithuanian history such as Vytautas the Great, Lithuania’s most popular leader. Personally, I loved the Saint Anne church, a jewel of the late Gothic. The red of its thirty-three different types of brick has mellowed over time to a soft pink. The church of the Holy Spirit is the main Orthodox church of Lithuania, but the Holy Mother of God was the first one. Whether you are a follower of the Virgin Mary or not, you should go to Aušros Vartai, or Gates of Dawn. This is the only surviving door of the ten contained in the defence wall, and it holds the painting of the Madonna of Vilnius, which is considered to be miracle-working. The painting is beautiful, but aside from the aesthetic value, there is an aura of deep devotion emanating from this place that will surely move you.

Saint Casimir, the country’s first baroque church, with its black dome and red tower, has quite a history: restored in the 18th Century after a fire, it was a grain silo during Napoleon’s march to Russia, it was an Orthodox temple in the 19th Century and even a museum of atheism during the Soviet period. There are many more churches with interesting stories, which highlights the open and multicultural spirit of Vilnius.

“Everyone has the right to be happy”

This is one of the declarations of the Constitution of the Republic of Užupis, the bohemian and artistic quarter of the city. Frequently compared with Montmartre, this original and amusing incubator of artists is one of the city’s oldest quarters. It has its own anthem, president, bishop, its own guardian and, as can be seen on a wall of Paupio street, its own Constitution. To reach this area, you have to cross the bridge over the Vilnele river, where you will see many engraved locks, symbol of love and union for couples. It might be a good idea to take your own and leave a mark of your visit to Lithuania. Of course, there is also a church, the city’s smallest, on Užupio street.

Everyone has the right to have fun

Vilnius: A trip to the Centre of Europe

With so much green around, the parks should be enjoyed. Kids will have a great time on the wooden structures in the Sereikiškių Park, or climbing on the sculptures and structures of the Pasakų, or fairytale, park. Lithuania is cold in winter, but you won’t have to wait for the rivers to freeze over to skate on ice. All year round there are ice-skating rinks at the Ice Palace and the Akropolis shopping centre, where the whole family will have fun trying to keep their balance. To warm up afterwards you can go for a snack in the café Nykštuky pasaulis or dwarf world, a charming place on the Laisvés avenue that is a large aquarium with play areas. It is normal to find many cultural activities for everyone in the European Capital of Culture 2009. Several theatres in the city have specialised in children’s shows. You can see a puppet show at the Lėlė puppet theatre on Arklių street, or a ballet show, or maybe even an opera at the National Opera and Ballet Theatre.

“Fashionable” parents will find brand name shops on Vía Didžioji and on Corso Gedimino street; however, it is unforgivable for you to return without an article of amber jewellery or linen clothing. The Amber Museum Gallery is on number 8 Via Šv. Mykolo; its prices are a bit higher than on the street markets, but the design is worthy of the extra cost, and you will receive a certificate with your purchase. A walk down Pilies street, the oldest in Vilnius, is also a must. Take the chance to visit the market that is set up at the end of the street, where Pilies becomes Didžiojiya street. Here you will find paintings, handicrafts, amber jewellery and linen clothing.

Vilnius is an amazing city, with everything it takes to make it a great place to visit and enjoy. Don’t be fooled by the reduced proportions of the old city, as there are secret nooks and crannies to be seen and stories to be heard around every corner. Let yourself be enchanted by the song of the Vilnia river mermaid and fall in love with this beautiful baroque gem.

Lithuanian gastronomy is simple, without fanfare, down to earth, and easily accepted by children. Most restaurants also offer children’s menus so that eating is not a nightmare. Make sure to leave room for desserts, because they are delicious and the chocolate is famous.

How to get there: There are flights from London with the companies Finnair and Czech Airlines, with stopover in Helsinki and Prague.

Currency: £1=3.75 litas. Banks open on weekdays until 5:00 or 6:00 p.m. The branches in the shopping centres usually operate during the weekends.

Visa: EU citizens do not require a visa, only a current passport or ID.

Turkey: Adventure in the heart of Istanbul and Antalya
THE HAVEN IN THE GREAT OUTDOORS
Related posts
Europe

The best nature and adventure plans in Lisbon

Turkey: Adventure in the heart of Istanbul and Antalya

Turin: Suitable for everyone