Skip to content
Balerares Islands  Formentera: A paradise to enjoy… as a family!
FacebookTwitterPinterestLinkedInTumblrRedditVKWhatsAppEmail

At first glance, it looks like one of those idyllic places to enjoy as a couple. But, beyond the ‘dolce far niente’ in its wonderful beaches and coves with crystal-clear waters, Formentera is also a paradise for families who want to finally enjoy a well-deserved summer holiday. 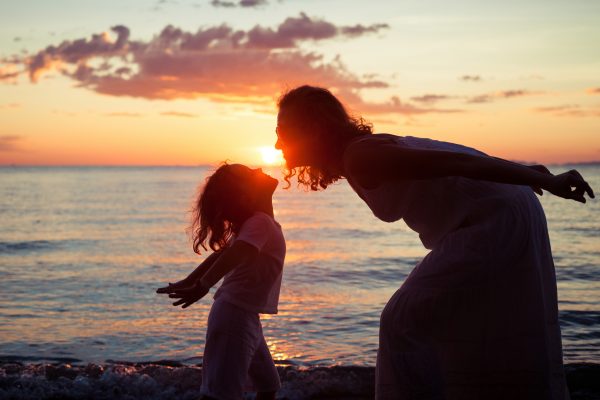 Bike rides or short walks on a practically flat island, bird watching, kayak routes discovering hidden corners of its coast and even parks with swings and games for the little ones make it the ideal place to enjoy a summer vacation that seemed unreachable.

Welcome to the paradise of Las Pitiusas

Bicycles are not (only) for the summer. Any time is good for cycling, which our children love so much. But to enjoy them at any time of the year we need a place that, due to its climate and orography, allows us to give free rein to pedaling while admiring nature in its purest form. A place… like Formentera!

The smallest of Las Pitiusas Islands, the fourth largest in the Balearic archipelago, is the perfect setting for a holiday or a family getaway. With an area of barely 83.2 km2 and a maximum distance of almost 20 km between La Savina – its only gateway, by sea – and Pilar de la Mola, at the eastern end, it is very manageable. As if this were not enough, being almost flat makes it even more affordable. It has only two elevations, surrounded by cliffs: Cap de Babaria, to the southwest, and the plateau of La Mola, to the east. This is precisely where the highest point of the island is located, Sa Talaiassa, at only 192 metres above sea level. 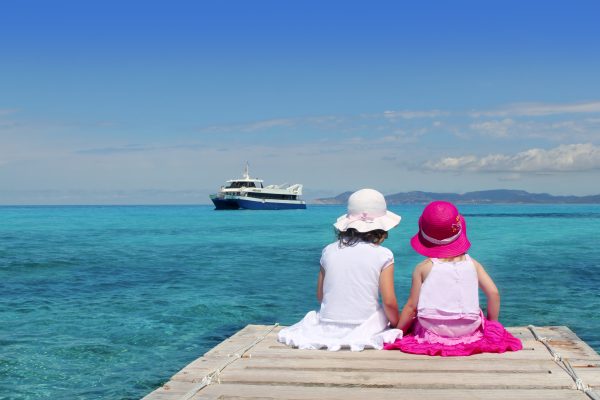 The adventure of discovering Formentera begins the moment families board the ferry that will take them to the island. Usually from Ibiza (although there is also one that departs from Denia, in Alicante, from April to October), its big sister and gateway to Las Pitiusas Islands. The journey between the two takes barely half an hour; a placid walk by sea while the smaller Pitiusa is getting bigger before our eyes. And once disembarked in La Savina… …let’s ride our bikes! Your own or a rented one. There are hundreds of them, and they are a very suitable means now after the pandemic. In addition, last year a regulation came into force limiting the entry of vehicles to the island in high season. A pioneering measure that has turned Formentera into a ‘sustainability laboratory’, an example for other destinations, demonstrating that it is possible to find a balance between environmental protection and the well-being of both residents and visitors. 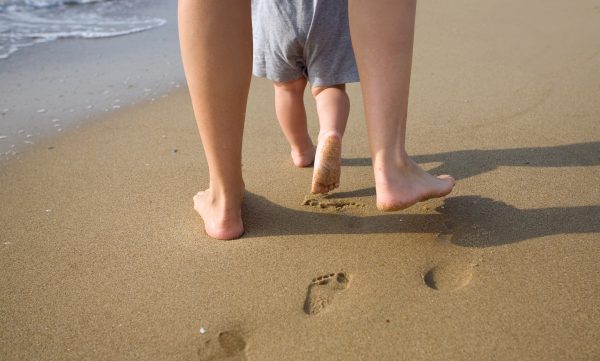 One of the first places you must visit is Ses Illetes, not in vain it is usually among the best beaches in the world and last year it was chosen as the fourth best in Europe by the Tripadvisor Traveller’s Choice. It is in the north of the island, in the Ses Salines de Eivissa y Formentera Natural Park, a protected area since 2001. More than 450 metres of beach divided in two by a small rocky area in the middle. Its calm, shallow, crystal-clear waters are ideal for parents to enjoy relaxed beach days while their children safely get in and out of the sea. Ses Illetes links up with Llevant beach and, further north of this narrow tongue of sand, you reach its northern end, from which you can see the islet of Espalmador, at a very short distance: the 100 metres of Pas des Trucadors.

A typical island construction located in the Ses Salines Natural Reserve, a small rural house in the countryside or an accommodation in some of the urban centres, no more than 20 minutes by car from the most remote point, allow you to enjoy a family stay in unique natural surroundings and with all kinds of activities by land and sea.

Benissa, a paradise in the Costa Blanca 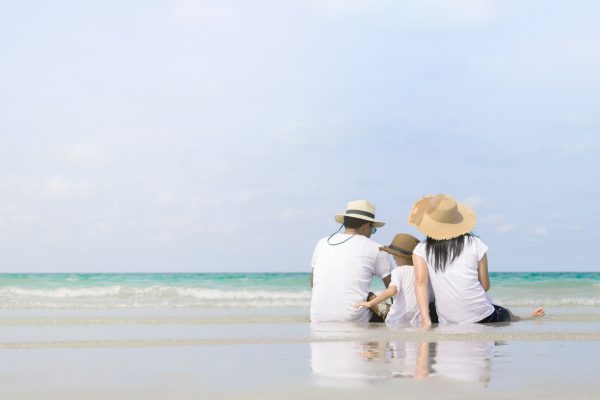 To the south of Ses Salines is the largest of Formentera’s two lakes, Estany Pudent, another protected natural area measuring 3.5 km. Walking or cycling along the Es Brolls path that surrounds it enables another activity that families will love: observing different species of birds up close – including the coquettish flamingos – that are mentioned there. The path of Es Brolls, of great biological richness and singularity of the landscape, gives this space a great ecotourist potential and is ideal for bird watching. For this reason, in 2020 an observation point will be created, as well as a specific signposting for the Birding Route.

Formentera has 32 Rutas Verdes (Green Routes), interlinked paths that add up to more than a hundred kilometres, most of them accessible by pedalling. Four of them are ideal for families. Route 1, ‘Camino de sa Guia hasta es Trucacords’, is 3.4 km long and can be done in 15 minutes (by bicycle) or 50 minutes (on foot). It leads to the far north and allows you to admire a landscape of savins and dune vegetation, next to turquoise waters. Route 2, ‘Camino des Brolls’, is 4.5 km long and takes 25 minutes (by bike) or 70 minutes (on foot). It surrounds the Estany Pudent. Route 8 leads to the ‘Cabo de Barberia’ which can be reached after 2.5 km from the car park. It takes 10 minutes by bike or half an hour on foot to the Es Cap lighthouse and the Garroveret watchtower. The place is ideal for watching the best sunsets on the island. And it has a ritual that will delight the children: access through a hole to an underground cave, with breathtaking views of the sea. Finally, it is worth mentioning Route 25 or ‘Camino de sa Pujada’. This is the most difficult route and is not suitable for cycling… but it is worth it. It is 4 kms to overcome a difference in level of 161 metres, starting from Es Caló, along the path that was used to climb to La Mola when the current road did not exist. It has the attraction of admiring the best panoramic views of the island. 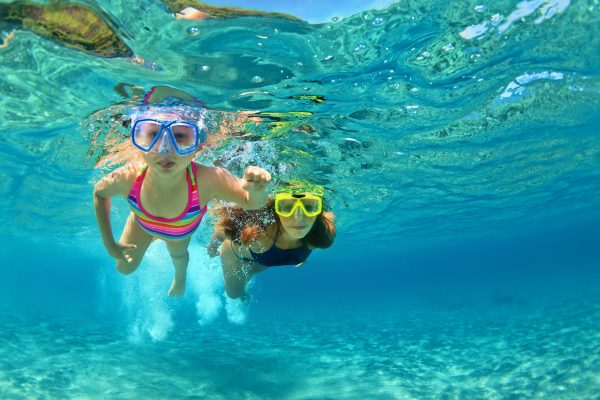 Once in La Mola, the ideal is to visit the easternmost village on the island, Pilar de la Mola. Very picturesque, it exudes a hippie air: that of its famous craft market held from May to October on Wednesday and Sunday afternoons. An ideal place for family gifts, from jewellery and jewellery to espadrilles, dresses, ceramic or glass pieces, leather, paintings, cartoons… The road leads to the other large lighthouse, with spectacular views over the cliffs from which to admire the best sunrises. This lighthouse is a cultural space open daily, except Mondays. A very special place for children, because here the French writer Jules Verne, a myth of adventure literature, set one of his novels, ‘Hector Servadac’, as a monolith certifies.

For a dip with children, apart from Ses Illetes, the best beaches are Cavall d’en Borràs, to the north; Cala Saona, a natural bay protected by low cliffs, to the west; Ses Canyes, in Es Pujols, and Ses Platgetes, in Es Caló, to the north; and Es Arenals, to the south in the Migjorn beach area, the longest on the island. The latter and Es Pujols are also beaches adapted for people with reduced mobility.

Children can also enjoy recreational facilities such as parks with swings and games in La Savina, Es Pujols (the largest hotel zone) or Sant Francesc, the capital of the island. It has a beautiful historical site that surrounds the church square, a building of curious structure because it was raised as a defensive fortress as well as a religious temple to protect against piracy. On the outskirts there are a couple of mills: Molí d’en Mateu and Molí d’en Jeroni. Although the best preserved of the six remaining on the island is the Molí Vell, in La Mola, whose restored interior can be visited in summer. 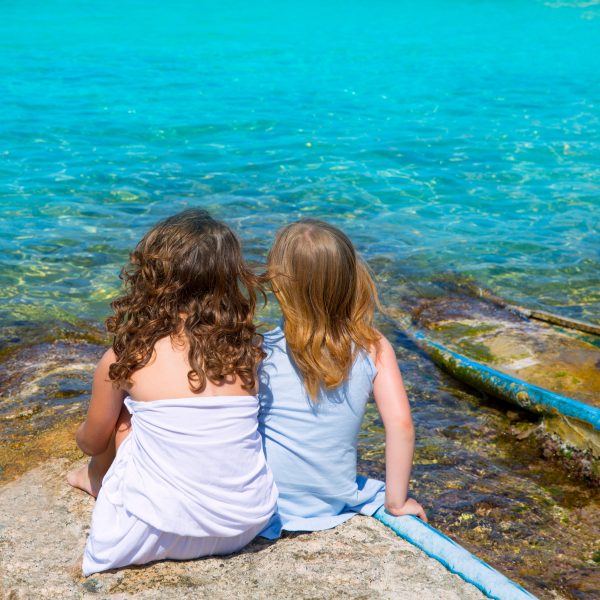 After so much activity, both on land and at sea, it’s not a bad idea to take a break and try the cuisine of Formentera inspired by Slow Food, traditional cuisine with local products, local wine… and lots of flavour! With dishes like the Ensalada payesa (with peix sec), the Frito de pulpo (octopus fry), the Sofrito payés (with meat and potatoes) or the Bullit de Peix (fish stew with potatoes). Plus, to help visitors locate the local products, the ‘Formentera Slow Food’ map has been published on paper and can also be accessed on smartphones

Nature, outdoor activities, beaches, windmills, gastronomy… an endless number of experiences to enjoy with the family, all very close to each other, in just 83.2 km2, one breath. This is the greatness of this family paradise.

Land activities are not only limited to bicycle or walking routes but also to horseback riding. There are two excursions that start at the Equestrian Centre located between La Savina and Sant Francesc. A short one, for non-experts, which lasts one hour and runs through the Estany des Peix. And another longer one, for those who already know how to ride a horse, lasts two hours. It is done at sunset, to reach Cala Saona coinciding with the sunset.

But Formentera, as an island, has a multitude of other activities at sea to enjoy its 69 km of coastline with the family. A fantastic natural landscape that, from the sea, acquires a new dimension. There are introductory courses in kayaking, sailing, windsurfing, paddle surfing, diving baptisms… More relaxed is to rent a boat (with or without skipper) to access the most surprising places and practice snorkeling. And by scuba diving you can admire one of the hidden treasures of Formentera: the largest meadow of Posidonia Oceanica in the Mediterranean, with an area of 700 km2, a Natural Heritage Site by UNESCO since 1999. As it is in danger of extinction, Formentera launched a solidarity micro-patronage project, Save Posidonia Project, which consists of sponsoring square metres of this plant, starting at 1 euro per square metre.

Benissa, a paradise in the Costa Blanca
Goldcar: You at the wheel; and by your side, the best company. What more could you ask for?
Related posts
Balerares Islands