Skip to content
Balerares Islands  Formentera. Light and tranquillity to enjoy with the family
FacebookTwitterPinterestLinkedInTumblrRedditVKWhatsAppEmail

The island of Formentera offers all its magic to families with children. Its calm, incredibly turquoise waters and warm temperature are perfect for our children to swim and play safely. But Formentera is not only sun and beach in Formentera. 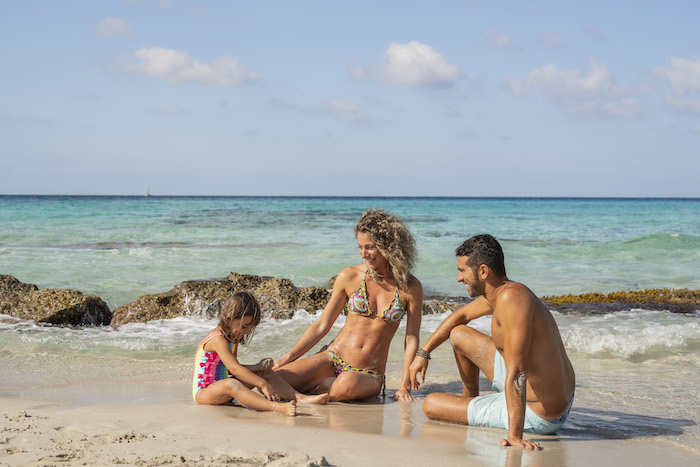 Formentera can only be reached by ferry, which only adds to its appearance as a natural paradise that is free from the noise and stress of the rest of the world. Its nature invites us to take quiet strolls and seek serenity, but also to feel active by sharing routes on bike or horseback or practising any water sport. 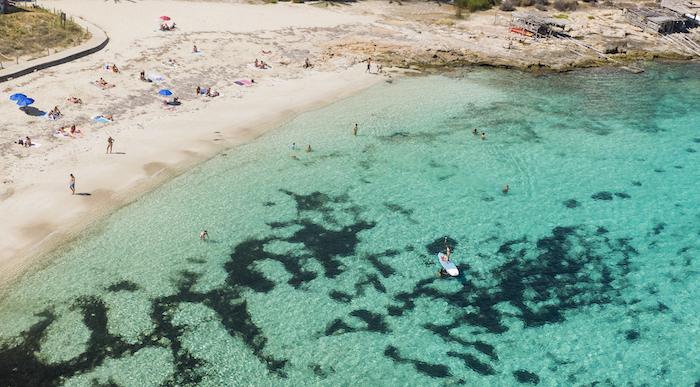 The turquoise blue tone of the waters surrounding Formentera is almost hypnotic and it is difficult not to be amazed by the cleanliness and transparency that we see in all its beaches, even the children are full of desire to swim in them! These crystal clear waters together with the fine white sand make the beaches of Formentera an authentic paradise where the hand of man is barely visible.

The reason for these special waters is the Posidonia aquatica, a Mediterranean marine plant that has been considered a World Heritage Site since 1999. It is one of the most prized natural assets of the island of Formentera, as this plant forms authentic underwater meadows.

Unfortunately, Posidonia is in danger because of the large number of boats whose anchors and chains are progressively destroying the seabed. For this reason, Formentera is promoting the use of ecological buoys that prevent the posidonia from suffering any kind of damage. Through the Save Posidonia project, actions dedicated to the conservation and protection of this plant can be carried out. 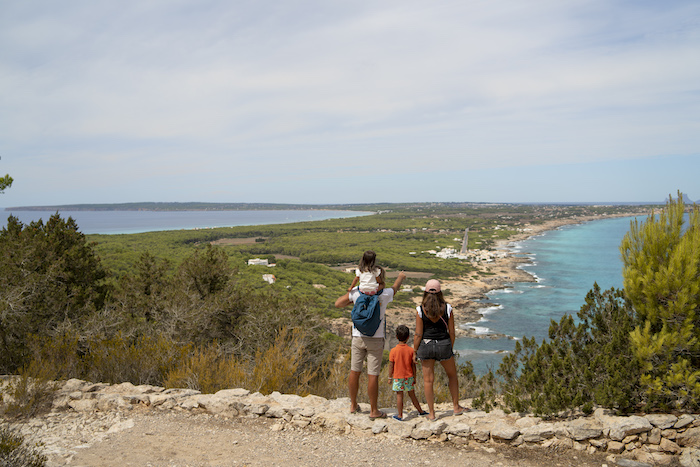 Since nature is the protagonist in Formentera, we cannot miss a visit to the Interpretation Centre of the Ses Salines Natural Park of Ibiza and Formentera in Can Marroig, a space where children can experience the fauna and flora of Ses Salines in a sensory way: touch to perceive the textures of plants and animals, listen to the sounds of nature?

In addition, we will be able to see photographs of the different plant and animal species in the natural park so that we can get to know its enormous biodiversity. They include images of the underwater landscape with a very amusing effect that simulates the sea, as if we were underwater.

And after the visit, we have a large pine forest in the shade of which we can take a break and have a picnic to get our strength back and play on the swings. 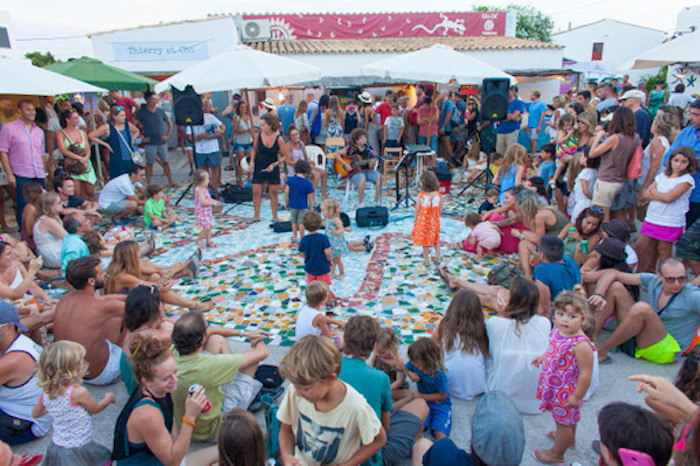 Touring the interior of the island

Formentera is not just sun and sand, it has much more to offer. A highly recommended activity is to visit some of its villages, where you can taste the purest Mediterranean essence, far removed from influences. El Pilar de la Mola has the most isolated urban centre on the island, although from May to October, Wednesday and Sunday afternoons attract people interested in visiting its beautiful craft market. There we can see all kinds of handmade products while enjoying live music. There we will see vineyards that give rise to the typical wine of the island and, of course, its famous lighthouse next to the cliffs where we will have breathtaking views.

Another recommended village is Es Caló de Sant Agustí due to its intense fishing tradition. In fact, its wooden dry docks for storing boats have been a Site of Cultural Interest since 2000. After strolling through its sandy coves and along the cliffs, we can get our strength back by trying the typical gastronomy in any of the restaurants in the area.

In Sant Francesc Xavier we can walk through its historic quarter to see buildings such as the 18th century parish church and also, near the town, we will find the mills of sa Mirada or sa Miranda, built in the 19th century and with marvellous views.

Sant Ferran de Ses Roques has been known for decades for its open, creative and festive character, which is marked by the craft markets that take place throughout the summer months, except Wednesdays and Sundays. In the surrounding area there are interesting sites such as windmills, a megalithic tomb and old wharfs.

Es Pujols is the main tourist town on the island and where you will find the largest number of hotels and restaurants where you can taste traditional dishes as well as the best international cuisine. There is also a large area of shops and boutiques and a craft market where you can indulge yourself. All this is complemented by a fine white sandy beach where you can relax after shopping.

The boats from Ibiza dock in La Savina, making it a very busy place where tourists and residents mingle. We can have a drink at the maritime station or stroll around the marina enjoying the bustling atmosphere. After strolling through the hippie market in the afternoon, we can put the finishing touch by watching the best sunset on the island. 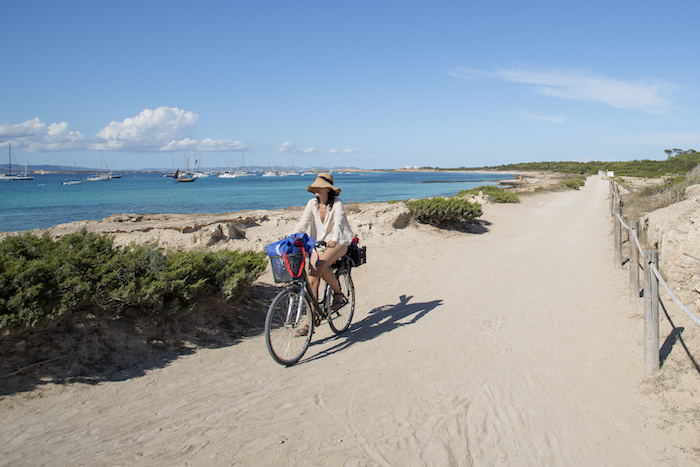 Formentera is located halfway between Africa and Europe, so its skies are crossed by hundreds of migratory birds that each year make the same route on their migration process. For this reason, the island is an incredible setting for contemplating birds from all over the world that stop in this paradise to take a rest.

The autumn months are the most appropriate because there are a greater number of them, although we can see migratory birds in Formentera all year round. More than two hundred different species, counting both those that are on the island all year round and those that are passing through and those that only go there to breed, are displayed before our eyes so that we can marvel at such diversity.

It is precisely this diversity, coupled with the same variety that exists in the flora, is what has made a part of Formentera has been included in the Natura 2000 Network. Some areas of the island have been classified as Special Protection Areas for Birds and Sites of Community Importance. 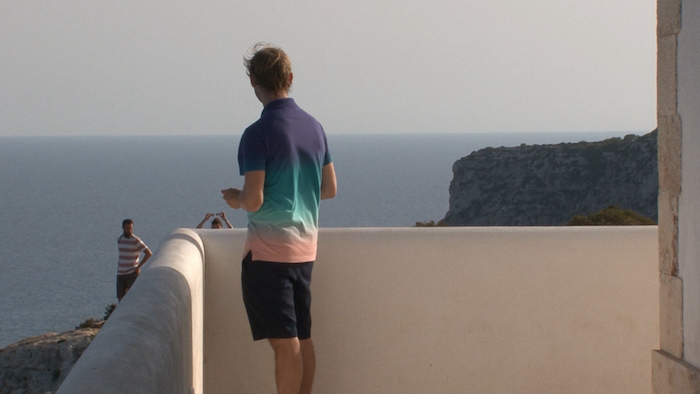 Along the coast of Formentera we can find a succession of defence towers that were built in the 18th century to protect the inhabitants of the island from pirate attacks. We can tell the children that when pirate ships appeared, fires were lit in the towers to send warning signals in the form of smoke, they will love it!

Touring these towers will take us to some of the points with the most spectacular views of Formentera and discover natural environments of great beauty in which we will hardly find other people. They are an opportunity to learn part of the island’s history but also to have relaxing moments to enjoy in the open air. 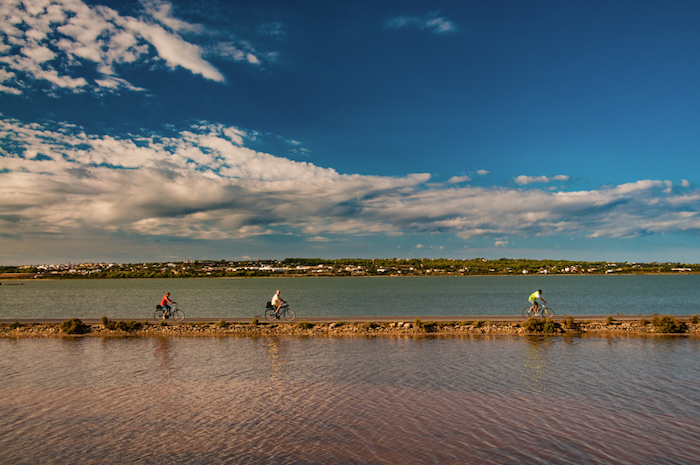 Hotels and restaurants for families

To round off our stay in Formentera we also have all the facilities and amenities of hotels and restaurants on the island. We have specialised structures such as family rooms, hotels with «mini-clubs» to entertain our children, all kinds of entertainment, swimming pools for children and leisure and play areas in the restaurants.

In this way, not only is special attention paid to our children, but we parents can also take time for ourselves, knowing that they are having fun under the attentive care of the best professionals. 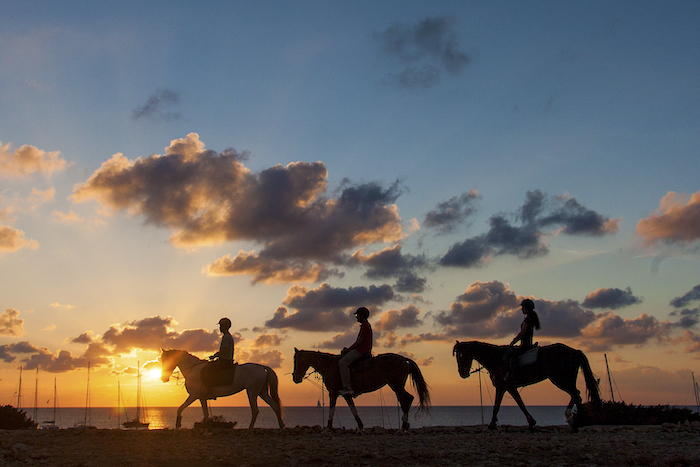 The best setting for family sports

With such a welcoming nature, it awakens the desire to be active outdoors and create memories with our loved ones. The island of Formentera offers us all its natural resources, starting with its 32 signposted green routes that we can walk, run or cycle along.

All these trails total more than 100 kilometres of flat terrain, making them suitable for all ages and abilities. We can take a leisurely stroll while chatting or we can take the bikes and burn off some energy pedalling.

We cannot fail to mention the horse riding routes, which are available all year round and require no previous experience. This is undoubtedly a different way of getting to know some of the most special corners of Formentera.

And what about water sports? Some of the options we have are paddle surfing, windsurfing, kayaking, scuba diving and snorkelling, all designed to enjoy the warm, pure waters that surround Formentera. To do this we have several companies that will provide us with professional instructors to teach us from scratch and accompany us at all times, so we only have to worry about having fun.

And, of course, we always have the option of surrendering to rest and relaxation on the sands of any of the island’s beaches to enjoy in peace and quiet while the children have a great time playing or cooling off on the shore.

But the possibilities for enjoyment do not end here, as we can also rent a boat, either with or without a skipper if we already have experience, and sail freely along the island’s coastline. In this way, we will be able to reach places of enormous beauty, which we can discover by snorkelling.

And to reach the maximum level of relaxation and disconnection we can join activities that not only cultivate the physical but also the spiritual: pilates, yoga or mindfulness are some examples that we can find.

Gran Canaria. A paradise of excitement and fun for the whole family
Magic Hotels at the Costa Blanca
Related posts
Balerares Islands