Skip to content
Galicia  Rivers Baixas: Nature and culture for everybody
FacebookTwitterPinterestLinkedInTumblrRedditVKWhatsAppEmail

We propose a journey inspired by the experiences of famous figures in our history and that children learn through games, culture and nature. Rivers Baixas is an ideal province for your family where fun is guaranteed. 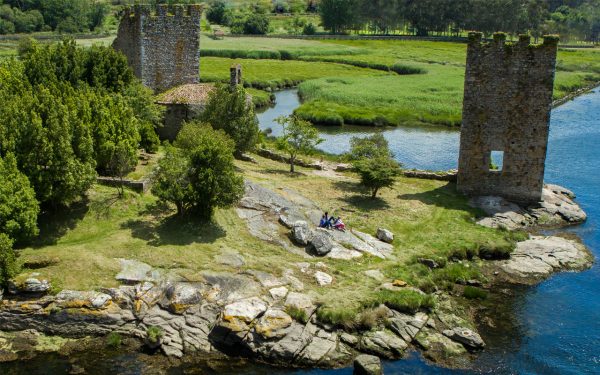 Along this trip you can feel history firsthand: live as a warrior of the Medieval, become all of a feudal Lord, run between the camellias of the manors or discover the passageways of the monasteries. In the province of Pontevedra are going to discover places linked to the history of the region: castles, towers and fortresses that served as a backdrop to the events of other times.

You can see the Torres del Oeste he ordered to build Alfonso III to prevent the attacks of the Vikings in Catoira. In Cambados you can find the Torre de San Sarduñino, whose strategic position was used to control the entrance of the Ria de Arousa. The Archbishop of Santiago sent to rebuild it after the attacks of the Normans.

Impressive is the Castillo de Soutomaior, birthplace of the famous warrior Pedro Madruga. Here it is essential that you take a time walk through magnificent gardens populated with different botanical species, among which is the Camellia, the emblematic flower of the Rivers Baixas. Did you know that it is one of the best places in the world for growing outdoors of this delicate flower?

But there is another castle that you can visit: Castillo de Sobroso in Mondariz, built in the 13th century and witness of the struggle between Mrs. Urraca, Queen of Castile, and his persistent enemies. The same is true with the Murallas de Salvaterra de Miño and Castillo del Conde, from where you can get to Portugal through the corridors under the river Miño.

If you go to the Ensenada de San Simón, You’ll be in the place in which took place the Batalla de Rande and also where came the famous Nautilus de Julio Verne in his book “20.000 Leguas de Viaje Submarino”. From there you can admire one of the most stunning scenery of Galicia with the Rande bridge of the island of San Simón in the foreground and background.

The museums of Rivers Baixas are conceived as spaces for the preservation of the past in which learning and discover the history of the province. One option for those more curious is the Casa Museo de Colón in Poio where it is exposed the Galician theory about the origin of the famous discoverer of America. In Baiona, the Museo de Carabela Pinta is located with the replica of this boat that it is possible to get.

The Museo del Mar de Galicia stands out in Vigo,

dedicated to the history of the fishing activity to the present day and which also refers to the sea and their different ecosystems. In addition, this museum has an aquarium. In the same province of Vigo but in the town of A Guarda there is another Museo del Mar.

On the same subject is the Museo Massó de Bueu that from the year 1932 is dedicated to providing information about the conquest of the oceans. There you can see from printed maps between the 15th and 19th centuries up to models of famous historic ships. Especially focused on the smallest of the House are the Museo de la Marioneta of Lalín, the  Museo de la Madera (MOMA) of A Estrada, of minerals from Galicia in the Minergal de O Porriño and the mining of Fontao en Vila de Cruces.

But it must not lose the opportunity to get outdoors and enjoy nature in family. Rias Baixas has many magical places to discover where the water has a place undisputed protagonist in forests and Galician mountains. Waterfalls of the Parque Natural del Río Barosa produces a true natural spectacle that is provided from the Ruta de los Molinos. Some of them have also been renovated as restaurants while maintaining its essence.

Another place to visit is the Cascada del Río Toxa, that by its vertical drop of more than 30 meters, you make it the highest in Galicia. This cascade comes from the river Toxa, born in the Serra do Candán to the North of the province. In addition, there is a path from the Monasterio de Carboeiro in Silleda, you turn it into a perfect ride.

And to continue to enjoy this natural phenomenon, you have to visit the Waterfalls of Segade in Caldas de Reis formed by the river Umia. You can see the ruins of old mills in the vicinity, and atop an old hydroelectric factory which gives the landscape a bucolic aspect.

Finally, in the river of Vigo the Waterfall is da Moura, concretamente en Domaio, Moaña. Of Muiños river  forms a small torrent that is worth contemplating. Among other attractions of this waterfall, as well as the views of the river, are the old restored mills and also the pools for bathing.

In Parque Nacional Marítimo Terrestre das Illas Atlánticas, on the island of Cortegada, You can visit the world’s largest laurel forest. The island is located at the bottom of the river of Arousa and is known for the richness of the seabed and the quality of the seafood that are collected there. Among its abundant vegetation, in addition, is a mansion of the 19th century, blocks, wells and a former 18th-century hospital.

The Centro de Interpretación de Campo Lameiro is located in the Archaeological Park of the same name and offers great information about this site, one of the most extensive in Europe. In this Center are responses that may arise on the local rock art when visiting the site, always teaching, visual and easily. It is accompanied by real parts, panels and audiovisual displays.

Further South is the Centro de Interpretación de O Castro de Vigo, a hill that rises in the heart of the city and who was reportedly left peacefully by villagers. The site has an area of 1,800 square meters in which is has rehabilitated three castrenas buildings of 2,000 years ago.

The Centro de Interpretación de la Villa Romana de Toralla also known as Centro de Interpretación del Mundo Romano (CIMR) or Finca Mirambell, the name of the family who discovered the site in the twenties of the 20th century. It was rehabilitated in 2014 and is situated on the beach of O Vao, Vigo, next to the salinas de Toralla. It is the only visitable castro de Galicia which has been excavated in their entirety. In summer, the make theatre performances.

The Centro de Interpretación de A Caeria is located in the archaeological area of the municipality of Poio, in the Pontevedra River, next to the Casal de Ferreiros. Since 2009, it offers a sample of petroglyphs from the Bronze Age which are accompanied by their respective information on its history and its discovery panels and different explanations about the rock art. Once visited the Centre, you can follow the visit by the same tour of the Archaeological Park.

On the peninsula of O Salnés are important Roman remains within walking distance from each other. One of them is the site of A Lanzada, in Sanxenxo, and the other is that of Adro Vello, in San Vicente de O Grove. The first, restored in 2010, contains a factory of marine products, several cabins castrenas and remains of a Galician and Roman settlement.

In Adro Vello, In addition, there are remains of buildings from different eras, overlapping, which include not only Romans but also medieval and following until the 18th century. On a salting factory of 2,000 years ago, a Roman villa was built. After this rose the Visigoth Church which was moved by the continuous pirate attacks. In the Middle Ages built a defensive tower which the square base is preserved and that continued in use as cemetery until the 18th century.

To finish the tour, in the town of Valga is located the site of A Igrexa Vella. His remains ranging from Roman times to the modern age and are both burial and industrial. These remains give way to the of a church basilica, which was followed by a second larger Temple.

On the trail of the ancient Galician people

In the municipality of Marín, near the beach of Mogor, is one of the best-known petroglyphs from Galicia, the labyrinth of Mogor, It has arrived at our days in an excellent state of conservation and surrounded by other engravings. The great rock Pedra dos Mouros, is accessed by a conditioned footbridge to observe this art without damaging it.

In Moana, between the mountains of Domaio and Gagan, an area known as «chan» by the plain between these two lifts is. There is a so-called funerary monument Chan de Arquiña and that it was settled 5,000 years ago. currently half-buried, but its remains can be seen. This primitive tomb is composed of sixteen stones and contained vessels of pottery, axes and knives.

In the village of Donón is located  mountain of  O Facho, a place that has served as a destination and stop of many civilizations throughout its history due to its geographical position. In addition, and given the views from there that make this site one of the best viewpoints of the Rías Baixas, stood a House of worship that became one of the first places of pilgrimage of the Atlantic coast.

174 stone acting of altars are located on the eastern slope of this mountain. Engravings that are in them make reference to the offerings to the God Berobreo and show the name of the divinity together a, sometimes, the name of the person who made the dedication.