Albacete is an amazing land. There we can walk through extensive plains and elevate it towards steep sierras and then descend again to the river valleys. It also has a great wealth of culture and history and such varied landscapes that allow us to enjoy many outdoor leisure activities. 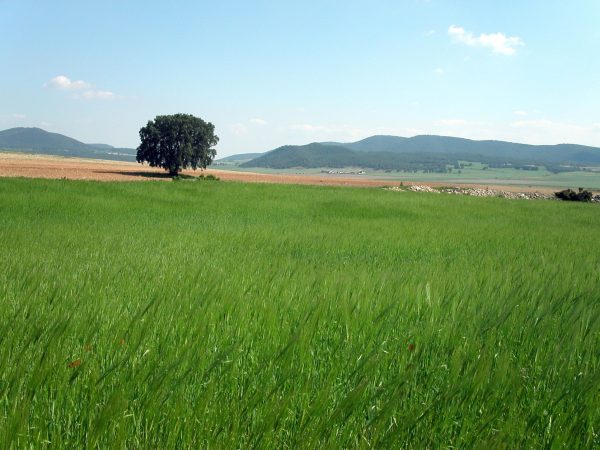 With an overflowing nature, and a multitude of possibilities for your enjoyment, Albacete is a destination full of surprises, with a lot to offer and which, for this reason, is worth highlighting, both for its culture and its options for active tourism, leisure and gastronomy.

Both children and adults will discover a great variety of places very close to each other to have fun and relax. Popular traditions abound as a popular expression of the richness of the culture. To all this, we must add a wide range of tourist establishments and activities specifically designed to make the stay of families with children as comfortable as possible. There is no excuse for not leaving home and visiting Albacete and its province! 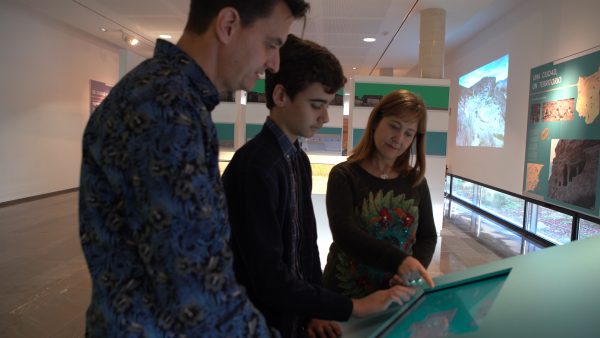 History, culture and heritage sprinkle the province of Albacete in the form of castles in which to imagine a thousand adventures. Among them we can highlight the castle of Cinchilla de Montearagon, where Cesar Borgia was imprisoned, a walk through its urban center allows you to discover religious buildings and palaces, next to cave houses. The castle of Almansa, declared a National Historic and Artistic Monument, has Almohad origins although its current appearance derives from the construction of the 14th century and the reforms of the second half of the 20th century. The Moors and Christians Festival and the recreation of the Battle of Almansa are held around this castle. The medieval castle-fortress of Caudete is located in the historical center of this town where we can also participate in the festivities of the Episodes Caudetanos or the Dance of the Child.

We can visit other castles in the Jucar Valley, such as the one in Alcalá del Jucar built between the 12th and 13th centuries which still has a pentagonal tower, part of a cistern and remains of towers and battlements.  And close to this town, you can see the walled enclosure of Jorquera, the walls of Villa del Ves or the castle of Carcelén. 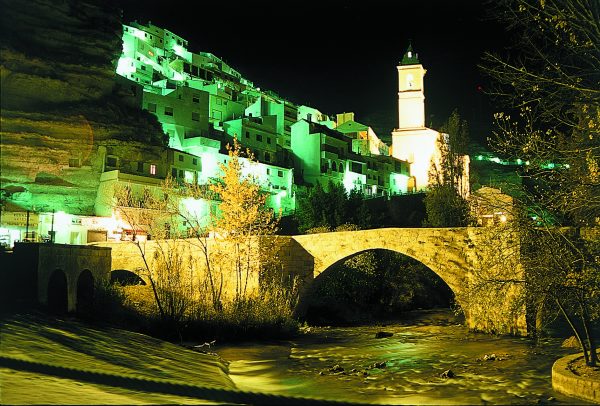 Albacete also has a wide network of museums of all kinds, including the Children’s Museum, the Cutlery Museum, the Municipal Museum and the Albacete Provincial Museum, all located in the capital, the Battle of Almansa Museum in the town of the same name, the Pottery and Dyeing Interpretation Centre in Villarrobledo, the Yeste Interpretation Centre and the Nerpio Cultural Park where the Solana de Las Covachas Cave Paintings are located. 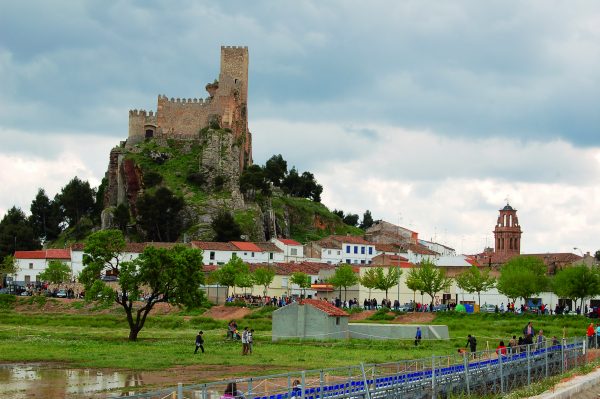 Albacete and its nature

The province of Albacete is dotted with numerous natural parks where you can enjoy nature with your family, whether you are hiking, observing the fauna and flora or picnicking under the trees. We can not stop talking about the Natural Park of Lagunas de Ruidera in Sierra de Alcaraz, one of the most beautiful and interesting wetlands of the Iberian Peninsula.

Also worth a visit are the Laguna del Arquillo Natural Reserve and the Laguna de los Ojos de Villaverde Natural Reserve located in the Sierra de Alcaraz, permanent wetlands where more than 90 animal species live. The Natural Reserve of the Lagoons of Pétrola in Monte Ibérico-Corredor de Almansa, gives us the possibility to see a colony of flamingos among other birds like the black-necked grebe or the avocet. In the Natural Park Calares del río Mundo y de la Sima, between the Sierra de Alcaraz and Sierra del Segura we will see a great diversity of landscapes and botany, being the second area of Spain in density of dolines.

Province of Teruel: A journey to its origin

In addition to these natural parks and reserves, the province of Albacete has outstanding landscapes such as the Saladar de Cordovilla Natural Reserve, the Cancarix Volcanic Piton Natural Monument, Yesares de Hellín Micro-reserve in Campos de Hellín with its characteristic semi-arid climate and its esparto grass and thyme bushes. The Cave of Montesinos in Sierra de Alcaraz has a roof with stalagmites. In its depths Cervantes placed a part of the adventures of Don Quixote de la Mancha. As a curiosity, we recommend visiting the Pino-Roble, a curious tree formed from a pine seed that germinated inside an oak trunk. We will find it at the exit of Peñascosa. 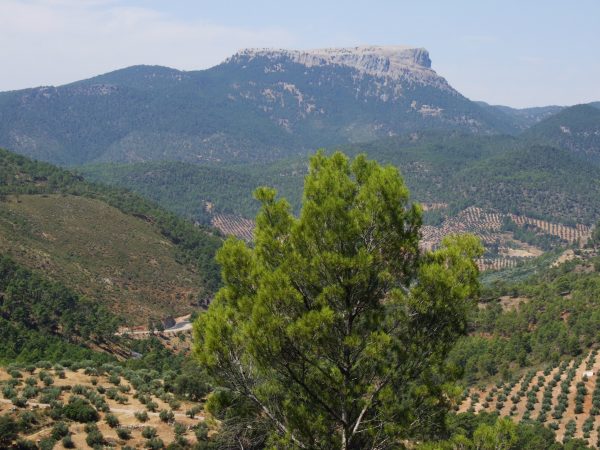 The province of Albacete is a land of artisans and we will meet them almost at every corner, not only exercising their trade but also in the form of commemorative statues such as the one dedicated to the Knife-makers in Albacete, the bronze workers of Riopar to the shoemakers of Almansa.

Therefore, one of the most interesting visits we can make is the Casa de Hortelano-Museo de la Cuchillería in Albacete, located next to the cathedral, where we can see unique pieces of cutlery in the area as well as the evolution of this trade over time.

Along the same lines, we find the Pottery and Sewing Interpretation Centre in Villarrobledo mentioned above and among the ethnographic museums, the one in Tiriez stands out, where tools and utensils related to the work in the field are shown, as well as materials identified with trades such as potter, blacksmith or carpenter. There are also objects related to domestic trousseaux and loom work, bobbin lace and embroidery. 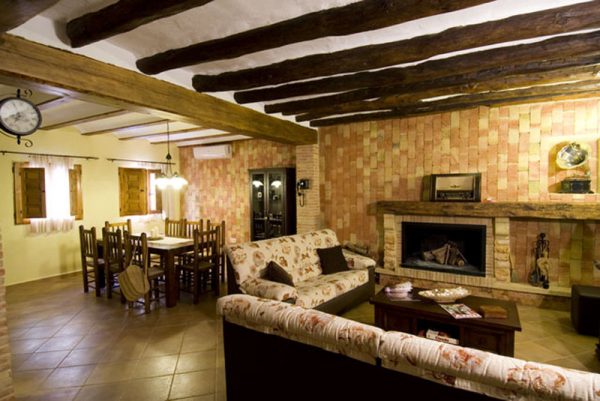 The province of Albacete offers many options for families with children to practice active tourism of all kinds, from the most peaceful and contemplative to those activities ideal for a good adrenaline rush. We can find several companies of active tourism in the valleys of the river Júcar and Cabriel where we can make climbing, rafting, canoeing, rent bicycles…

We also have the option of horseback riding, 4×4 or hiking and in the World River we find companies with which to do caving or multi-adventure circuits designed especially for families with children with zip lines, bridges and climbing walls.

And of course, in the province we find many opportunities for hiking using royal ravines, local roads and trails themselves. In addition, there are railway lines that are not used and have been reconverted into cycling and walking tracks within the program: «Vías Verdes» coordinated by the Spanish Railways Foundation.

Golf fans can practice this sport both at the Las Pinaillas Golf Course, 12 kilometres from Albacete, and at the Bonillo Golf Course, which is somewhat more rustic. 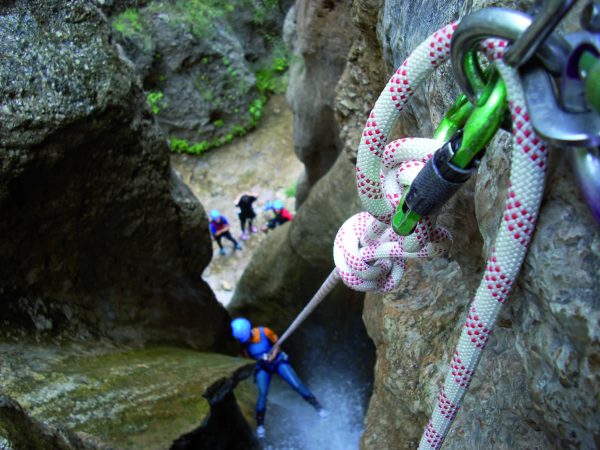 Routes for the whole family

If there is something we like about the province of Albacete, it is the amount of routes that there are, not only related to trekking and nature but also of other kinds such as, for example, the Literary Route of Don Quixote that begins in the city of Albacete and includes towns such as La Roda, Villarrobledo, Munera, El Bonillo or Ossa de Montiel, places with a great historical and artistic heritage that will take us into the history of the province.

In Campos de Hellín we can walk the Archaeology Route to see the monuments of Hellín and also places like the Roman aqueduct of Albatana, the cave paintings of Minateda, the Roman bridges over the river Mundo or above all the Archaeological Park of Tolmo de Minateda with its Iberian, Roman and Visigothic past.

The Drum Route between Hellin and Tobarra will take us through all the historical-artistic treasures of these towns including, of course, the Easter Museum and the Drum Museum. In Alcaraz we can walk the Green Route. It is about 100 kilometres long and will allow us to enjoy the landscape and places like the medieval city of Alcaraz itself. 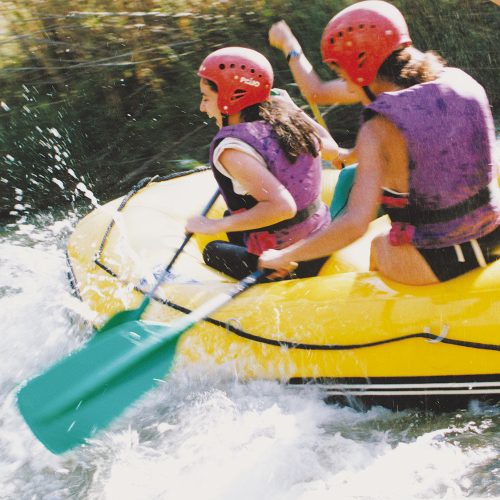 The Sierra del Agua Route is perfect for families with children who enjoy contemplating exuberant landscapes with rivers, waterfalls and abundant vegetation. Some examples are the Batán de Bogarra, a waterfall covered with moss, which is part of the route the sculptures, the Fuenfría in Paterna del Madera or the cave of the Jets in Riópar where the Mundo river falls in a big waterfall. It is also worth visiting the film route of «Amanece quye no es poco» between the towns of Ayna, Lietor and Molinicos. In the region there are various viewpoints and natural swimming pools for bathing.

Finally, in Peñas de San Pedro we can do the Route of Tradition and History. There we find the town hall and the parish church from the 18th century and a few kilometres away, the Sanctuary of the Christ of the Sahúco where there is a tradition of carrying the Christ in a pilgrimage from the village to the town and vice versa on the run and on the shoulders of the young men. From there we have the option to link up with the Green Route of Alcaraz.